Amsler grid assesses the integrity of visual field corresponding to the macular region of the retina. It evaluates 20 degrees around the macula and it is mainly used to test symptoms of Macular Degeneration (MD). It may occur if for instance a client’s Vcc is reduced, when the client has an acquired colour vision anomaly, or when the macula has any unusual appearance. Original Amsler grid is available in black on white background or white on black background, but a colour version in the blue-yellow combination is more sensitive and can be used for clients with possible visual pathway abnormalities, associated with retina, the optic nerve and pituitary gland. The red/black combination also exists and it aims to stimulate long wavelength foveal cones. It is mainly used for detection of colour scotomas and desaturation which may occur in toxic maculopathies, optic neuropathies and chiasmal lesions. Traditionally, a cardboard form is used to test visual field and possible scotomas at near. A pen or a pencil and a grid were used for testing, so the client draws possible irregularities or fields missing. A practitioner used to collect these grids and save them into their folders. Nowadays, on electronic devices the client can use their fingertips to draw the possible anomalies seen on the grid. The image is easily saved into the album, and the practitioner can make a note in the client’s folder on what day, and at what time the test was performed. Furthermore, the practitioner has only the picture saved without any names, so also the client´s data are protected.

The client wears their best near correction and holds the test at a distance of 30 cm under bright illumination. Test is undertaken monocularly, so one eye is occluded and the client is asked to focus the dot in the middle of the grid. If the client cannot see the dot in the centre, use a chart in another colour combination. Then you start leading the client through the test by saying: “While looking at the centre dot, can you see the four corners? Are any of the lines missing? Do any have holes in them? If so, where? Are all the lines in the test straight? Are any of them wavy, if so, where? Are all the squares the same size? If some of them are bigger or smaller, which ones?” The client is instructed to touch the lines that are not aligned with the others. Using the fingertips the client is asked to choose one of the three functions (black marker, rubber or black pencil) to scratch all the lines that seem to be wavy, broken, distorted or missing. When finished and all the details recorded, occlude the other eye and repeat the procedure.

The client will use three drawing functions to project on the screen how they see monocularly. In case of defects at least one of the functions will be used. In case of wavy lines there can be signs of metamorphopia, commonly present in clients with macular oedema and brain tumours. White areas represent negative relative scotoma, which could be caused by optic nerve defect or peripheral field loss like in Glaucoma patients. 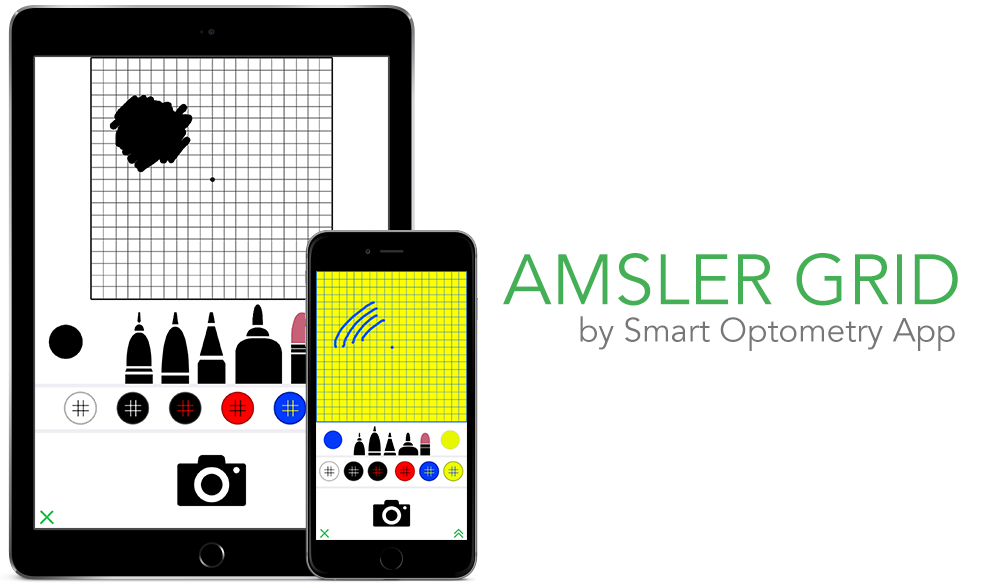