Contrast sensitivity test assesses the ability to distinguish between fine and finer increments of light versus dark. Measurements of visual acuity with low contrast optotypes are becoming more broadly used, especially for clients with corneal or lenticular disorders or for those who had refractive surgery. Contrast is one of the most important parameters activating cortical cells involved in vision processing. Two commonly used charts are the Pelli-Robson and Vistech contrast charts, which are presented in paper or cardboard forms. Electronic testing gives the client and the practitioner a straightforward interpretation of the contrast sensitivity. The luminance of the screen can slightly vary the results between different screens, but also colours on traditional tablets slowly fade away.

Test consists of 48 letters (8 rows and 6 columns). When the dimmer surface is black and reflects no light, the ratio is 1. Contrast is usually expressed in percentage, and then the ratio is multiplied by 100. Hence, the maximum contrast is 100%. The contrast of the upper letter on the left is 1 and the contrast is dropping to minimum (bottom right). Client holds the test at 40 cm with full correction and is asked to recognise the last letter that can be seen on the test. After finding it, the client names the letter and touches it on the screen.

It is important for the practitioner to be aware of the answer in order to perform the test well. Regarding the letter pressed, the value of the maximum contrast will be shown. 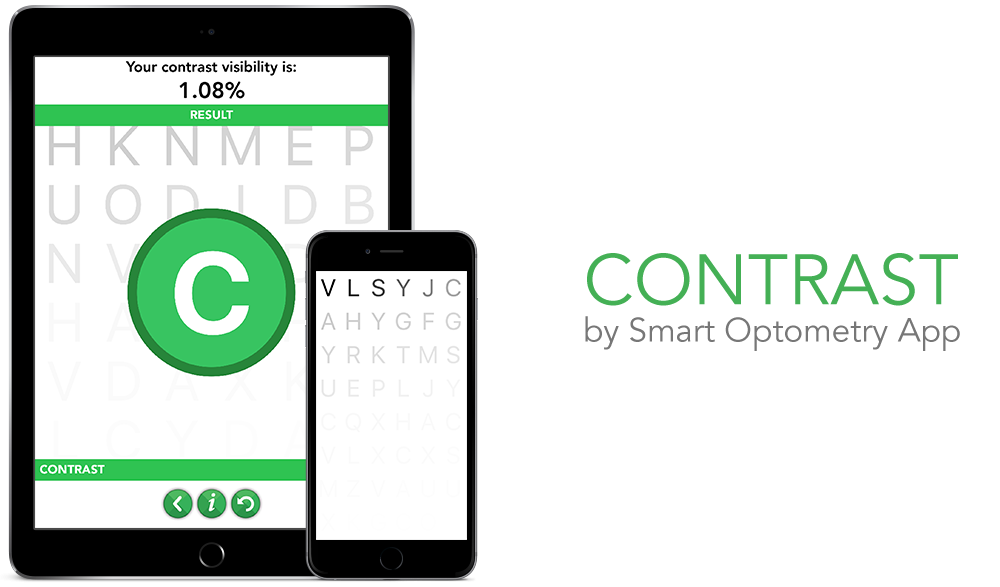