Amblyopia refers to a unilateral or rarely bilateral decrease of vison. It is mainly caused by an underdeveloped optic nerve that results in the brain favouring one eye over the other. It is a common vision deficiency in young children and the leading cause of reduced vision among the youth. Amblyopia can occur due to misalignment of the two eyes – strabismus, when one eye is more nearsighted, more farsighted or has more astigmatism. These terms refer to the ability of the eye to focus light rays on central retina – fovea. With strabismus, the eyes can either cross inwards (esotropia) or turn outwards (exotropia). Sometimes amblyopia is caused due to the congenital cataracts. Maze tests the person´s ability on the amblyopic eye. Depending on the visual acuity of the amblyopic eye, a practitioner tests its ability so the client slides the finger through the maze. A child is more willing to cooperate while using an electronic device, e.g. Tablet, rather than doing the testing on a paper form chart.

When entering the test, you are able to choose between three different visual acuities, 0.1, 0.2 and 0.5, depending on the client’s best visual acuity. The client wears their habitual correction for the near. The measurement is done monocularly but under binocular conditions. A red glass filter is put in front of the client´s non-amblyopic eye. The amblyopic eye can stay uncovered or a green filter can be put in front of it. In case of wearing a green filter, the client would see the maze in black colours instead of red. The test works well in either case. The client should hold the test at the preferred distance. The client touches the starting point with the index finger of the dominant hand and tries to finish the maze by sliding through the gaps between the red walls. A special pen for smartphone screens and tablets may be used as well. The client tries to finish the maze with as little touches as possible.

Practitioners will be able to check the progression of the ocular function in the amblyopic eye. Having three levels of difficulty enables you to monitor improvements in follow-ups. 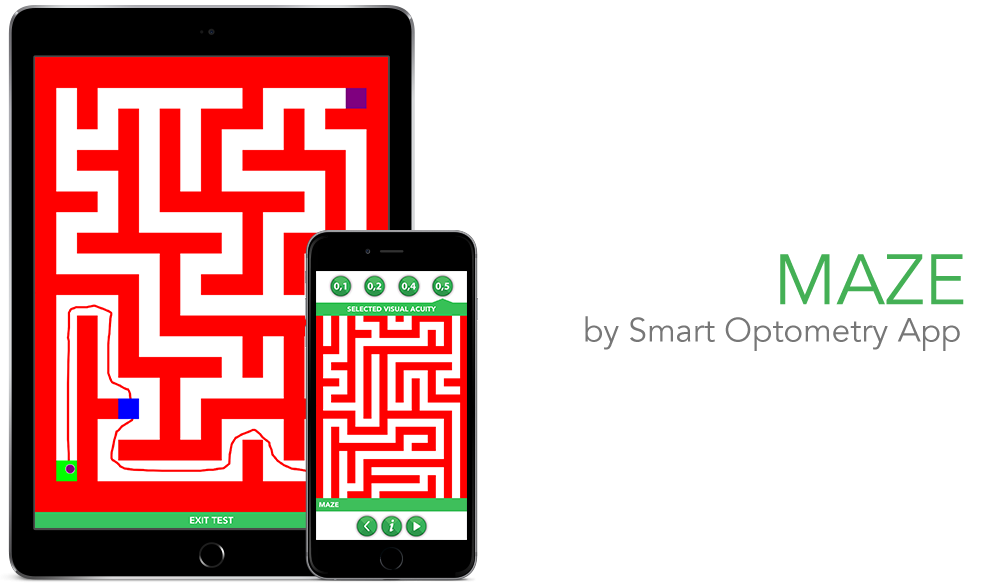