Eye charts examine the person’s ability to distinguish black letters or numbers on a white background. Snellen chart, first of its kind was developed by the Dutch eye doctor Hermann Snellen in the 1860s. There are many different variations of eye charts, but in general they show 11 rows of capital letters. In every line the letters get progressively smaller. The visual acuity is examined at 6 metres or 20 feet. People are more and more used to use phones on a daily basis; this is why they would also be more familiar with the reading text on the smartphones than on traditional paper charts. Test measures the clarity of vision or its ability to resolve detail. Client´s visual acuity depends on the accuracy of the retinal focus, the integrity of the eye´s neural elements and the interpretive faculty of the brain. Visual acuity at near should be tested in all clients, regardless of the client´s age. Reading test is used to verify that the prescribed correction is appropriate. When dealing with clients with low vision, the main concern may not be optics, but functional performance, since it is the basis to prescribe suitable magnification.

The client wears his habitual correction for the distance (or for the near in case of presbyopia). Measurement is done either monocularly or binocularly. When entering the test, you are able to choose between 3 preferential distances, 25 cm, 33 cm 40 centimetres. The client should hold the test at chosen distance. For the precise measurement of the distance use a tape measure. Three different forms at each distance and the same visual acuity are possible to choose from. In the left corner the current visual acuity is written down. By sliding the screen up and down, the three different forms of the test can be chosen (letters, Illiterate E test types and random sentences). By sliding left and right, the visual acuity of the letters is about to change. The scale is designed from visual acuity of 0.1 up to 1.2.

Write down the visual acuity either monocularly or binocularly.

Letters are designed on a rectangular or square framework (Bennet, 1965), 5×5 or 5×4 grid. British standards BS 4274 suggest the following 5×4 sanserif letters: D, E, F, H, N, P, R, U, V, Z. Only ten letters are chosen so that the chance of guessing correctly is reduced to 1 in 10, although the client expects all the letters from the alphabet. The British standards also suggests that the minimum contrast between the letters and the backgrounds should be at least 0.9 (90%), and the test luminance of 600 lux. 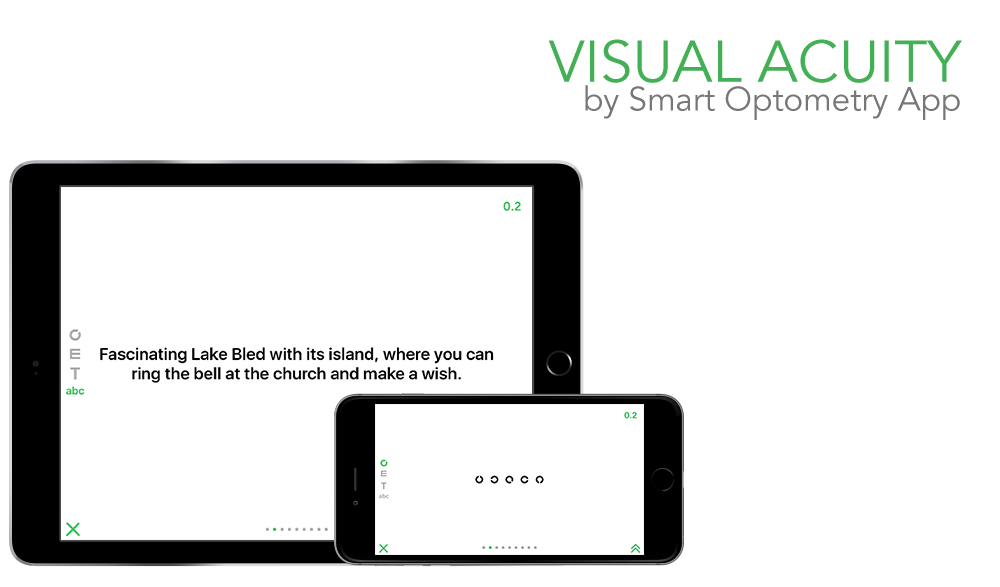